Dainik Viral
Home News Auto The Supply Chain Report- From Industry Magnates Lens – ET Auto
Share
Facebook
Twitter
Google+
Pinterest
WhatsApp
New Delhi: A week before the big day of their first child, a South Delhi businessman was gripped under a strange worry, even though everything seemed perfect. The house was all bustling with guests and celebrations – but he was anxious if he could get the delivery of the luxury SUV, which he wanted to gift the newlyweds. He had booked the SUV worth almost a crore three months ago, but the dealer was not ascertaining delivery. Fortunately, he was able to connect with the company’s senior officials who promised to deliver the car on the wedding day. As promised, the car was sent at the company’s cost from the plant to the venue at the nick of the moment. Indeed, it had a happy ending, almost like a Bollywood movie!

But, I am sure many of us have not been that lucky, and waiting for the exciting day has remained perennial and ever stretching. The waiting period for high-demand cars runs up to 12 months or even more, while the average minimum waiting period has been 6 to 8 months. Mahindra & Mahindra has roped in a research and audit firm to manage the bookings and waiting time for its high-selling Thar.

Trouble and troubleshooting What really has pushed us to this situation? Evidently, the automakers are not able to produce adequate numbers and all of them had to halt production due to shortage of components soon after the Covid-19-induced lockdown. Though most of them have restored normalcy, shortage of semiconductors persists.

Stellantis and Volkswagen each reported production shortfalls in July-September of around 600,000 vehicles because of a lack of semiconductors for the processors. The semiconductor shortage is expected to moderate India’s passenger vehicle sales to 11%-13% this financial year.

The lockdown in Malaysia – a leading producer of semiconductors – had its bearing all around and experts believe that the situation is not going to get better until the first half of 2022.

We have done a wide expansion of sources -country-wise and company-wise apart from the technological improvement in terms of testing evaluation from new sources, to deal with situation. However, what worries me is that the auto industry knows that it does not have space even to keep materials on the shop floor, because they’re designed as tight assembly lines.Raghupati Singhania – CMD, JK Tyre and Industries

Most of the Indian carmakers have warned of a production shortfall due to chip shortage. Recently at a product launch, Maruti Suzuki India MD & CEO, Kenichi Ayukawa, said, “The second quarter was another challenging period because of the unprecedented global supply crisis of electronic components. Industry, at large, witnessed significant disruption in its production operations.”Raghupati Singhania, chairman and managing director, JK Tyre & Industries, said his company has done a wide expansion of sources country-wise, and company-wise apart from the technological improvement in terms of testing evaluation from new sources, and quickly.

Talking about the unavailability of containers and other logistics bottlenecks, Singhania pointed out. “In terms of the container shortages, shipping freight is going haywire, and there is absolutely no shipping space. And thereby, again, the question is, how do we handle it?”

Singhania said that he has tried to resolve the issue by the use of multi-modal agencies, multi-point transportation, land, water, sea, and tried to use different ports, instead of using just one port, for diversification, and this has helped.

Meanwhile, a fresh rise in cases of Covid-19 in China and Germany may throw up new challenges. Power crisis in China has added to the trouble in the past few weeks.

Why did the automotive industry suffer the most due to chip shortage though it holds only about 14% of the total semiconductor demand? There has been a massive demand surge from gaming consoles, medical equipment, and laptops to cater to the work from home setup.

Some experts suggest that the shortage was owing to the lower margins that the auto industry offers. Others attribute it to the just-in-time (JIT) supply chain system that the industry follows.

“The other thing that I’m worried about is the demand of the Indian or international auto industry for JIT. This will have to undergo a change,” Singhania said during a panel discussion. We have witnessed in the past two years across the board in the automotive industry that the challenge was in the basic planning, sourcing, and distribution. “We will have to revisit a whole lot of them,” he added.

“However, what worries me is that the auto industry knows that it does not have space even to keep materials on the shop floor, because they’re designed as tight assembly lines,” Singhai said.

Planning which was done on a very tight schedule needs to be relaxed and more provisions and allowances will have to be made in terms of timelines. “And for fallback positions in sourcing, one of the important things is that we have to go for multiple sources of companies and components which were confined to a particular country or a particular company or a particular source,” he added. 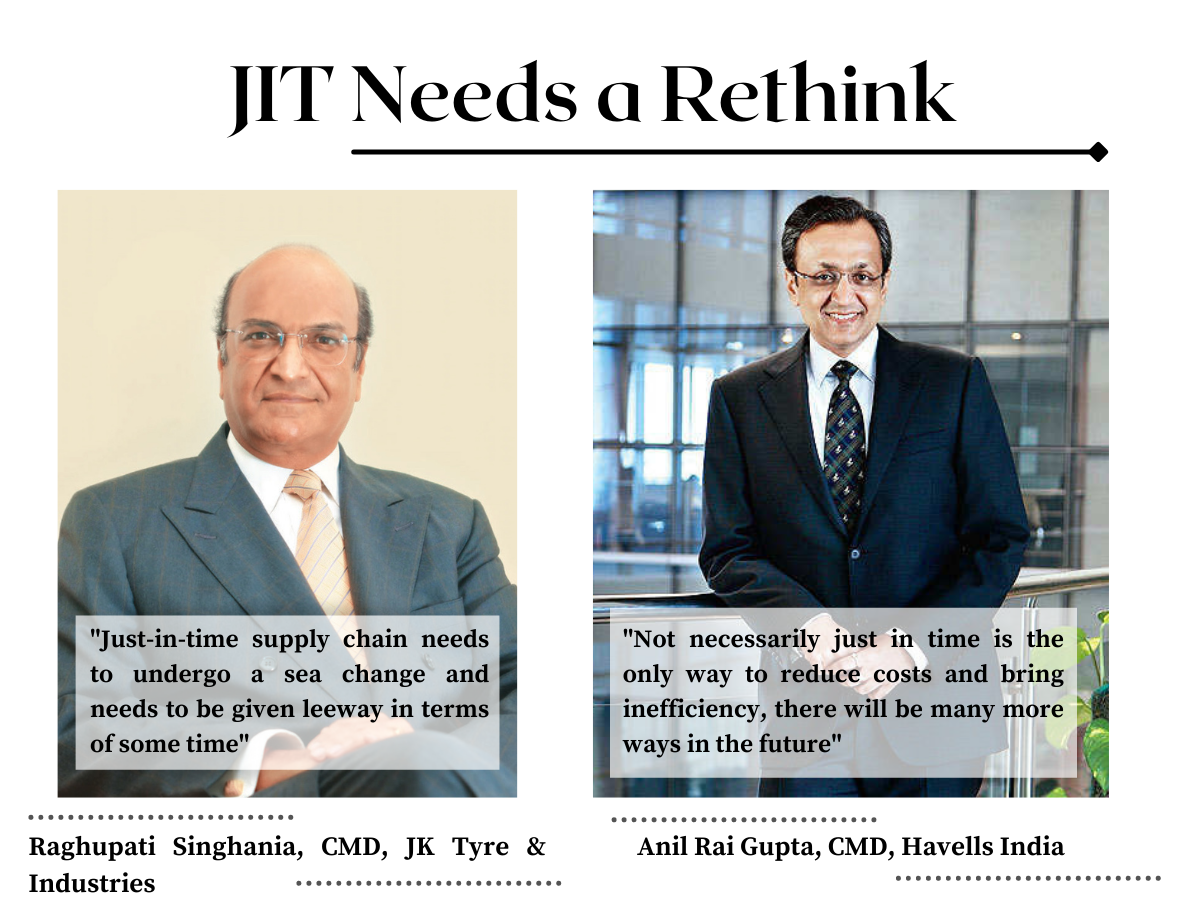 According to V C Sehgal, Chairman, Samvardhana Motherson Group, India’s largest and leading component maker globally, there is a need for a rethink and realignment. The demand for electronics and their parts are going to increase dramatically. Even a LED lamp uses a chip. “I believe that every country, every company, and every decision-maker has to rethink about what the future will be and how to go ahead. I think we’re all doing that in our own way,” he said.

Global demand for automotive semiconductors, in terms of revenue, was worth USD 45.98 billion in 2020 and it is expected to reach USD 81.40 billion in 2027, growing at a CAGR of 8.5% from 2020 to 2027. Rising production of electric vehicles, high production volumes of automobiles, and growing advanced safety and security needs are anticipated to drive the growth of the global automotive semiconductor market.

However, Sehgal emphasized that JIT is the most efficient and robust system which shall not change even though the current uncertainty disrupted the entire value chain.

“Just-in-time is a very intelligent system, and I think it has to be further encouraged. It is very cost efficient and I will not blame it for these particular problems that we have. In fact, the OEMs will demand the tier-one suppliers to hold on with big stocks for the inventory. This will require higher working capital from suppliers to hold on and build stocks at their end, rather than the auto companies themselves doing that. So the realignment of the whole thing, that is the planning, sourcing, distribution, and logistics, is going to be a huge challenge,” he explained.

Echoing a similar sentiment, R C Bhargava, Chairman of India’s largest car company Maruti Suzuki India, said, “JIT is a measure to reduce the cost of production as it saves the cost of inventory and reduces the capital cost. However, it is very difficult to maintain the right quality and quantity across the value chain from raw material suppliers to component suppliers and finally the OEMs. Indian manufacturers need to up their ante making this more effective and successful.”

When asked if he finds the villain in JIT for the current supply chain disruption, he said, “this is a crisis that is created due to factories being shut down and this is an exceptional situation and it has nothing to do with JIT.”

“During the past 10 years and especially after Covid-19 there has been a relook at the overall supply chain strategy. The last two or three decades were dominated by the thought process that the world is flat, that competitiveness needs to be improved and we should create Centres of Excellence, just-in-time suppliers getting dependent on one strategic supplier source. I believe there needs to be a rethink on JIT as the only way to reduce costs and bring inefficiency. There will be many more ways in the future through which productivity can be improved.”

The supply chain disruption witnessed in the last two years is unprecedented, the challenge lies in the sourcing and distribution.Raghupati Singhania -CMD, JK Tyre and Industries

As a panacea to the devastating supply chain fiasco, industry magnates are ready to ditch globalisation for localisation.

“About 20 years ago, we recognized that just one big plant and then manufacturing over there is not the answer. We have to have multiple plants in multiple countries, multiple locations, and go close to the customer. So the logistics has to be managed in a manner which is being close to the carmaker or to the customer and what can be shipped in bulk and things that can be done in a place where you are manufacturing it globally,” Sehgal asserts as a long term solution.

“So regionalising and multiple sourcing, rather than single sourcing, which take away the uncertainty of business are something which must be looked at,” he added.

Agreeing to it, Sehgal opined that companies which were dependent on having one source of manufacturing in one country, need to relocate. For example, in the auto industry, a lot of things will depend on China for reasons like cost, quality, and competitiveness. That’s where dependence on one area and one country was the wrong thing.

“Well, I believe that even then, this whole talk about Thomas Friedman’s world has started ever since then; there has always been a mix of where globalisation makes sense or where it doesn’t,” Gupta added.

Sehgal mentioned that they have tried on regionalization, wherein they have gone closer to the costume customer.

India in China plus strategy

In a post-Covid-19 world, the demand for a suitable China plus one global supply chain hub has been rising. India has been seen as one of the important contenders in this direction.

The China supply system is getting bottlenecked because of so many factors we know of. And therefore, apart from political considerations of the US-China trade war, many are thinking about replacing China.

When we are looking at opportunities to relocate or create a supply base, the Southeast Asian countries fall in line because of their correct investment policies. But India does have a good chance “if we play our act right, Singhania said

“India has a large auto component base. So it should become a logical choice for becoming or developing into a global supply chain hub. Of course, it has huge challenges in terms of infrastructure, response time, and so on. However, India does stand a good chance. In terms of growing automotive hubs, there is a solid base, there are very robust manufacturing capabilities backed by skilled manpower, IT capabilities, rapid technology adoptions, port accesses, and so on,” Singhania added.

He pointed that there is the emergence of Southeast Asian countries such as Vietnam, Thailand and Indonesia. Many American companies which wanted to create another base outside China opted for Indonesia, and they have set up their large manufacturing facilities. Vietnam and Thailand are certainly very strong contenders as India has a plethora of bureaucratic challenges.

Anil Rai Gupta also opined that Southeast Asia as a whole has a huge opportunity to become a manufacturing base for the world, other than China. The other major point is that, the industry leaders argued, the supply chain is a byproduct of the local market. The size of it depends very much on the local market.

If You Can Identify 30/36 Of These Blurry “Twilight” Characters, You’re...

BMW Ramps Up Production Of eDrive Systems At Dingolfing Plant –...